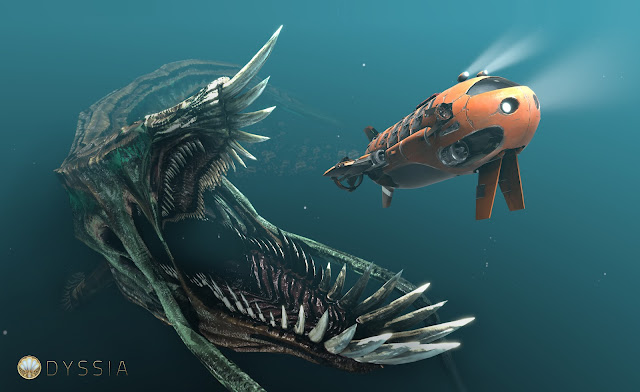 Teaser of Odyssia, our senior thesis. I made the creature on the left, while one of my team members -> Michael Hosticka -> did the escape submarine. Modeled using Maya, textured using 3D Coat and Photoshop, and put into the Unreal Development Kit engine.

I'll post the trailer soon - in the meantime, enjoy this image! Feel free to use it as a desktop background.


This is a feel reel I threw together in 2 hours for a workshop pitch presentation. The music is called Last Stand from Omnimusic, used with permission through our college. Our entire team comprised of five people from different majors. An intense experience!


It's my first Feel Reel ever, so given that I think it turned out pretty well. Not only that - it was a ton of fun! I think I may use this method to help my own ideas percolate.

Random doodle. I'll be scanning my sketchbook soon, and that's got a loooot in it. 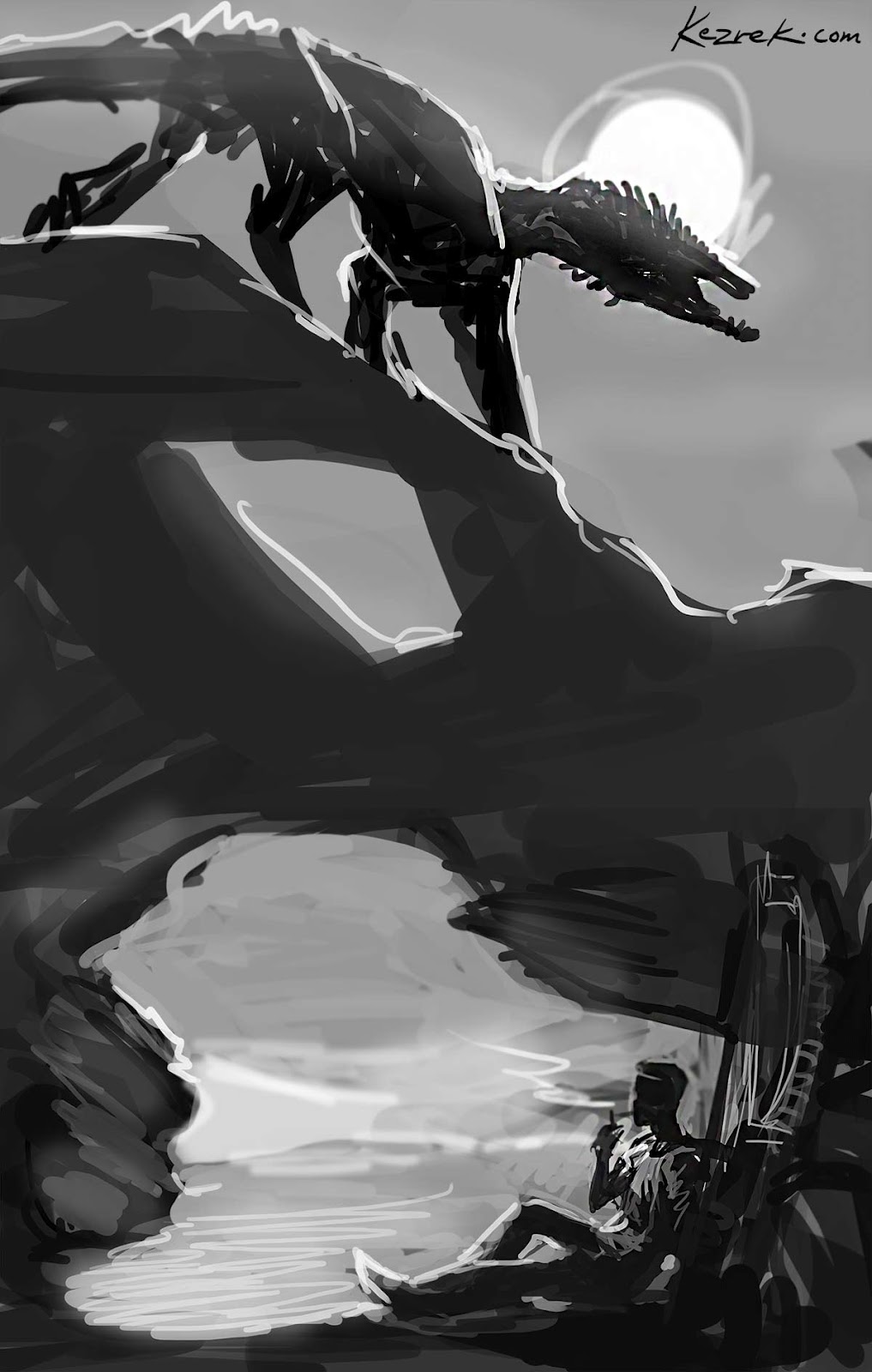 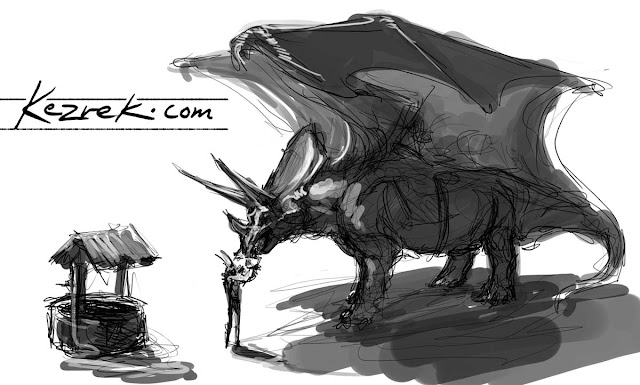 EA Visceral emailed me with the opportunity for an art test. My friend Amanda Cha got the test as well, so we both powered through our own ideas. Here's what I came up with. Seeing as they didn't say otherwise, I'm going to post it for you to see. Please refrain from critiquing it here - you can email me if you have any input, though.

We had to work with and around the silhouettes they provided initially - two males, a regular buff guy and a brute-sized buff guy, and a female. The upper-left silhouettes (minus the white lines) indicate more or less what I started off with. You can see it's a bit unrealistic, but that's what we had to work with. Challenge accepted!

If you know me at all, you know I'm not an avid cliche-follower. I thought about making soldiers, demons, assassins... even something with the 'one arm is bigger than the other' for asymmetry. They're all, however, kind of forgettable: indistinguishable from what other artists have already done time and time again. What could I come up with that stands out in concept? Hopefully what resulted accomplished even a tiny bit of that. We'll see what EA thinks in April. 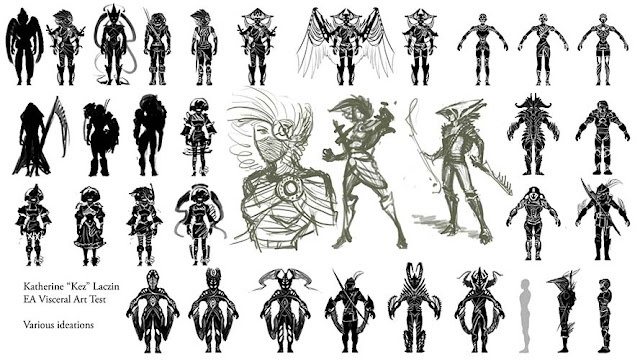 Unsure of how far we could taper from the silhouettes, I tried to find a happy medium between the crazier silhouettes and the typical ones. This first character's design, for instance, follows the male silhouette pretty closely, but he has cloth bands connecting his arms and hips, a helmet, and holes in his legs. This is a demigod of blindness and deception. His helmet covers his entire head except the center. I made subtle hints of eye-socket impressions in the helmet. Is that one gaping eye real? Is his face even there underneath, or is the helmet concealing something more hideous? It's up to the eye of the beholder, really (hah, get it? hurr durrr). The eye in his chest is the same - I imagine this character with his arms folded often, to conceal his sternum's eye until he needs its powers.

Since my first character was very serious and fantastical, even creepy, I wanted to fling my next concept into the opposite direction. So, let's make a bright and happy girl who loves music!

This is Harkwynn. She has quite a number of design choices, so I'll start with the broad strokes. She needed to feel energetic, exploding, exciting. The holograms off her body serve like lines off a cartoon character - they show exclamation and punctuation: her emotions and movements, even when she is standing still in these drawings. Her colors indicate night life and neon light.

For the details, if you'll notice, there's a symbol repeating throughout her design. It's similar to an Omega ( Ω ). The most obvious one is on her hologram visor. This symbol is actually a part of a future human/alien alphabet that I'm working on; literally translated, it simply means 'Yah!' Can you find the other ones, whether clearly marked or vague? Have fun!

Added note - For holidays, my father always liked to give presents that appealed to each of the senses. I kept this idea in the back of my mind while creating these two characters. The demigod is all about sight, and the lack thereof. He doesn't even have ears or a mouth. Harkwynn, on the other hand, is all sound. Her eyes are slightly hidden by the hologram visor, whereas her mouth is always big and smiling and her ears, albeit covered, are accented by the enormous headphones. Just food for thought.

That's the art test. They were looking for linework rather than render-quality. They filled the position already, but this was a fun and challenging exercise!

Marty taught me how to tessellate 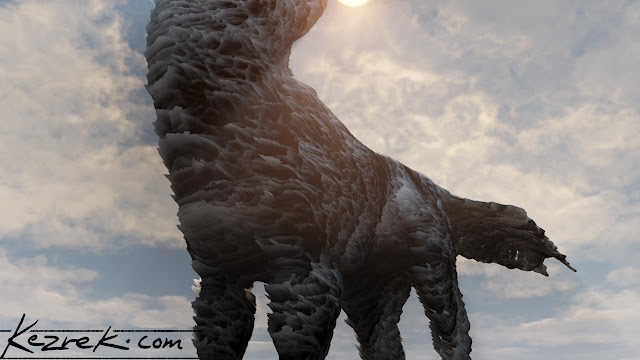 Ho boy, I am gonna have fun with this 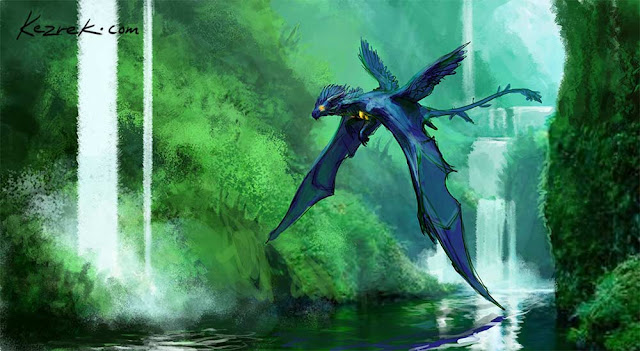 More to come
-Kez
No comments: 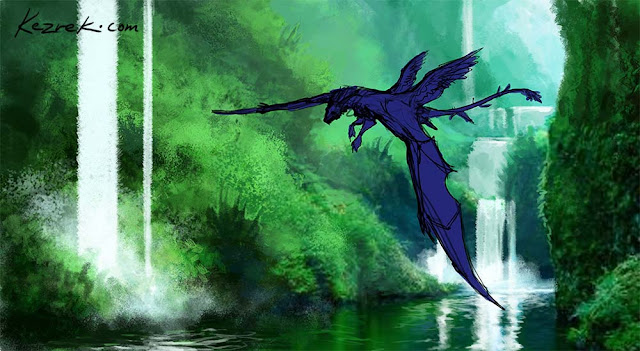 This is a long-overdue process shot of a drawing I owe a great dragon artist. Heavily sparked by their character's color scheme, I wanted to put this dragon in an environment that would support and amplify her colors without being too overwhelming or blending in - hence the bluish-green against her beautiful violet. She also has a few bright, fiery focal points on her to make her stand out. I may change her pose slightly before continuing. 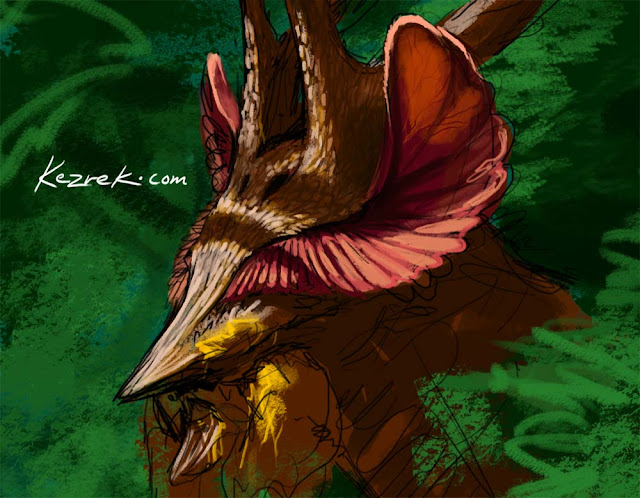 More slow progress. It's going to be difficult getting this predator's kill to look bloodied up when their blood has an amber-ish color. It might look like snot if I'm not too careful.

A cruddy screenshot of my creature for this last senior project. Does he look familiar? 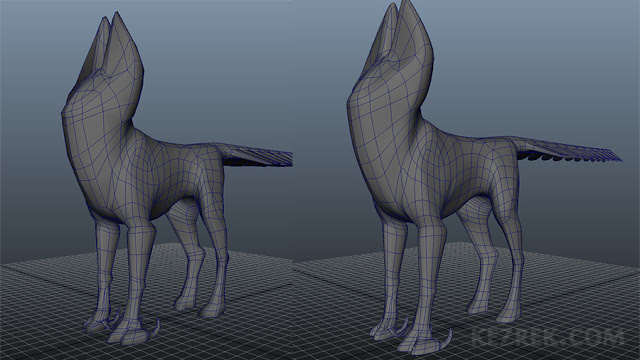 Likely not, but these guys snoop around my portfolio. I'm struggling with topology here, too many X-shaped wires. Argh, wireframes are supposed to follow contours, yes. I'm usually so quick with drawing anatomy, but forcing myself to align each muscle and bone to a specific point feels constricting. Which muscle should be accented? Should this joint have this topology? Erh, more research tomorrow.

Regardless, I'm enthusiastic about this little guy, even rigging his crazy claws and mouth (they have tiny lips but HUGE mouths). So excite.